I’ve been doing Algebra with Leo for some time, and every once in a while I actually amaze myself at just how cool Algebra is. Leo and I have in mind writing a book called “Algebra is Magic” which would just be a bunch of short solutions to what look like difficult problems, but which just “magically” drop out through Algebra.

Whenever we do any math, I’ve been trying to engrain that the first question is always “What’s the model?”, that is, what is the formal ‘equational’/’mathematical’/’algebraic’ form of whatever problem we’re doing?

Now, usually I know where we’re going, because I can do most of the things that a K-12 student would ever encounter more-or-less in my head, or at least I can tell right away what the algebraic form is going to be. So, together we write down the model (which I already know … or am able to work out without thinking too hard, so I lead him through this), and then we push through the algebra, and “voila!” the answer. (We always, of course, check the answer, at least for making sense, and usually for being correct by pushing it back through the original equation.)

Now, usually, the “voila!” moment is unsurprising to me, because I knew it was going to work, because I could see that we did it right, and where it was going. But, as I said at the outset, sometimes the problem is hard enough that even I’m not sure whether we’re right, and even I am surprised when it works!

There have been many of these, and our plan is to write these up, first in this blog, and eventually in a book.

Here’s just the latest one, as an example:

We’re starting on Calculus, and the book that I’m using (Stewart’s Calculus [8th ed.] from Engage Learning) has a  diagnostic test in the preface. For the most part these are pretty simple high school Algebra problems, and even Leo can do most of them … maybe with a little guidance from me … and I can, of course, do all of them. But there are a couple that are even tricky for me.

One such is this:

Okay, fine, but on the face of it I had no sense that this was going to be anything but a mess to prove. But we decided to use the “Algebra is Magic” mantra:

“Get a model and just push it through!”

Okay, so even I don’t know where this was going, but went with it, but here goes:

(I’m using ‘p’ here instead of ‘o’ to mean ‘opposite’, to avoid confusion with zero)

Next, blindly push through the algebra, not really knowing where this is going:

Multiply through by a:

Multiply through by h:

And then … Whoa! What The…. That’s The Pythagorean Theorem!

We weren’t headed there at all; we didn’t actually know where we were headed; Algebra brought us to The Pythagorean Theorem … by Magic!

And if we take The Pythagorean Theorem as axiomatic (which, of course we do!), then we just proved the target expression!

(This, of course, led into into long discussions of the difference between theorems and axioms, including studying a bunch of proofs of The Pythagorean Theorem itself. But none of that was as magical as running headlong into it without knowing where we were headed!)

Long long time ago (actually, only back in 2015) we tracked a short road trip and manually computed and plotted the Time/Distance/Velocity/Acceleration. I’ve been wanting to revisit that fun little experiment, and this past weekend we had the opportunity on a 60-mile trip. Leo recorded our distance from start every five miles. This time, instead of manually plotting (which he does a lot of in school), I started him on Excel, which is certainly how he’ll be doing this once he gets beyond 3rd…or maybe 5th grade!

Here’re the results (you can see the master by clicking the pic):

The valley in the middle of the trip is where we stopped for lunch and turned around. And, yes, we really did travel exactly 60 miles, although that wasn’t planned!

Okay, so I’m a little slow! I’ve been working my way toward calculus with Leo for a long time. We’ve explored a great deal among the preliminaries, such as algebra, geometry, and trig, done a little “real life calculus” using cars and rockets, and I’ve even left various fun “calculus coloring books” around, which he’s picked up and variously paged through. We’ve even done some Minecraft-math before that verges on calculus. But until today I hadn’t really broached any real calculus.

Today it hit me that Minecraft provides a perfect setting to discuss integration via Riemann Sums (which most of you will remember as the method of rectangles). The reason is obvious: In Minecraft you (generally) only have rectangles, so if you want to know the area under something — say the roof of semi-circular building — you don’t have any choice but to build the thing out of blocks. Therefore, the actual area is actually most conveniently measured in terms of piles of blocks, i.e., rectangles, i.e., the basis of the Reimann Sums!

Once I realized this it took only a couple of minutes to come up with some easy examples. To you and me, this just looks like simple intro calculus, but the “patter” — the story I was telling all the way through — is all about Minecraft! 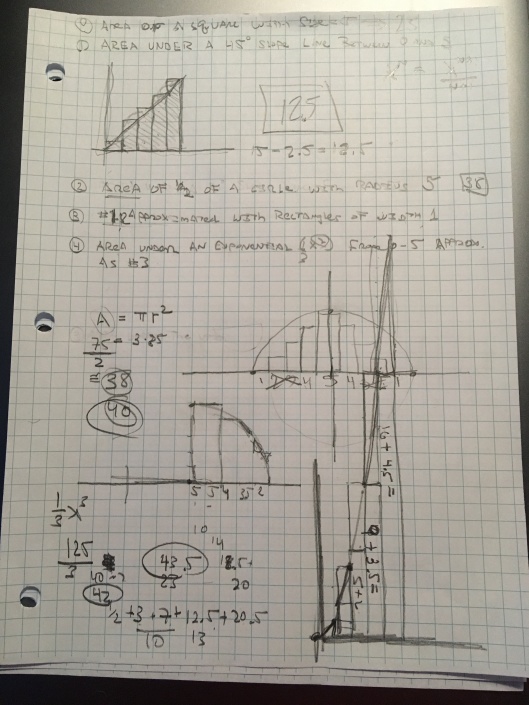 Next I explored the idea that if the blocks were smaller, the approximation would get better and better. Conveniently, the Minecraft blocks are 16-units wide, so you can divide them in half four times and still be working with integers, making it easy to actually work the detailed math.

What’s most interesting about this is that because of Leo’s facility with Minecraft, once he had his Minecraft thinking cap on (which, once on, is extremely hard to get off!), he was able to see right away how the simple version of the rectangle-based integration worked, and was also able to easily think through (approximately) how things would go if the blocks were divided in half, and then half again and again and again!

I think that this (somewhat “duh”) realization of the relationship between Minecraft and Calculus has opened up our whole next level of math fun!

This year I’ve been making a concerted effort to “climb the mountain of algebra” with Leo through physics (like some sort of Newtonian Julie Andrews*). One way into this that works extremely well in motivational terms is (unfortunately) via MineCraft. Here’s an early example of using MineCraft to motivate some algebra. This week we did an interesting problem on Newton’s second law. (That’s the F=MA one, in case you don’t remember the order!) The pages are reproduced below, and if you click any of them, they link to a downloadable powerpoint which contains a bunch of “fun” math worksheets, including these (although, of course, “fun” is in the eye of the student). 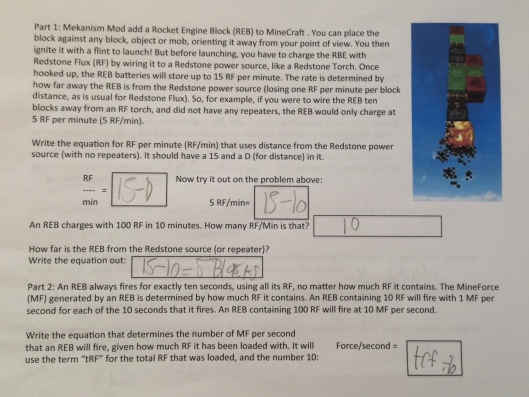 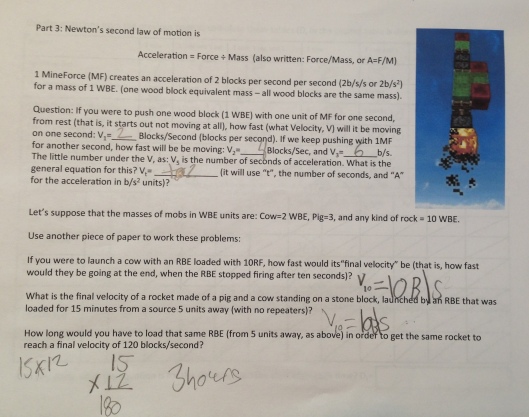 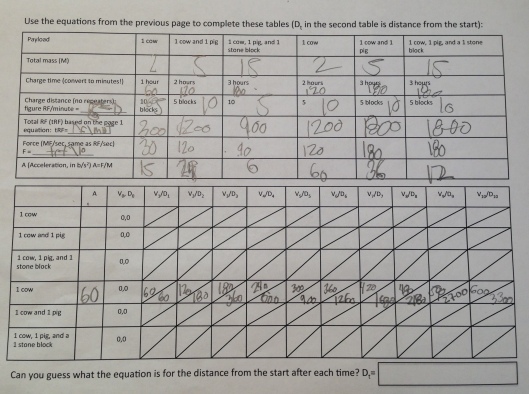 By the way, although there really is a MineCraft Mod called “Mekanism”, which has a lot of cool stuff, like lasers and a fusion reactor, it doesn’t actually have an REB … I made that up!

(*) This is an oblique reference to the wonderful movie “In The Loop”. Search for “Climb the mountain of conflict”, and watch the youtube video. I won’t link to it because it’s slightly NSFW (“strong language”, as they say), and definitely NSFK! But if you’re an adult, it’ll make you truly lol!

A long time ago, when I was doing Gorilla Science, I had the idea to do a mathematical physics (specifically mechanics) audio book entirely based on driving. The idea was (is) that drivers would learn both math and physics, from the ground up, all the way to mathematical mechanics and thermodynamics, all just by listening to this thing in the car, and using the car, the roadway, and the other cars around you as the domain. You’d even do experiments while just driving along on your normal commute. The educational theory was (is) that you need to learn things in context (not very original, I know!), and what better context for mechanics (and thermodynamics) can we have than a one ton spherical cow hurtling around tight curves at 50mph.

Anyway, I of course never got around to the audio book, but yesterday I got to cash out one of the central experiments with Leo.

We were headed to campus, about ten miles if I take the long route, which conveniently includes an un-necessary but useful highway segment. So with Leo and Carrie in the back, and me driving, we set out to record our trip. Since Leo’s still not great and writing between the lines (as you’ll get to see in a moment), Carrie sat next to him and actually filled in the table with instantaneous speed and distance every minute, but Leo was watching the clock and reading off the speed and distances from the dashboard. All I did was drive, and occasionally remind him that the minute had turned over.

Here’s what we ended up with: 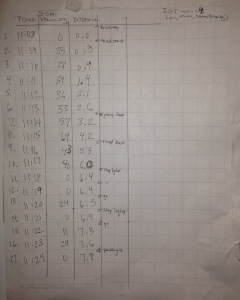 (I’m gonna stop saying “(with a little help)” and you can just read the following as though everyplace I say that Leo did something, it is followed by that phrase!)

The result is the top graph: 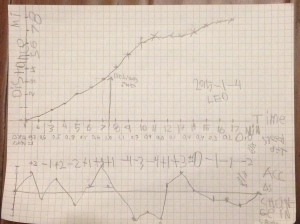 You can see where this is going….

The middle table of numbers is the velocity, that is (read on the right) distance/time. Conveniently, we’d used one minute intervals. Actually, I’d suggested 30 seconds, but Leo insisted on one minute, and it turns out that that was very clever, because the denominators are all 1! (I’m sure he didn’t realize that when he insisted on one minute…I didn’t even realize it until we got to this exercise. He did, however, intuit that 30 seconds would have been too busy, and he was right about that!) Since the denominators are all 1.0, we just left them out. So there you have the average speed (per minute) in that segment. And, easy peezy (or however that’s spelled?) do it again, and you have acceleration – we started just writing them as whole numbers instead of having to write zero-point-one before every one of them.

Leo did every calculation on this page — and NOT with ANY help, aside from my helping to keep track of where the next pair of numbers to process was, and I wrote down some of the numbers where they were small, since, as you can tell from the accelerations, Leo’s not too good at writing small numbers (another reason for dropping the decimals).

So there you go: measurement, physics, a little algebra and calculus, all just from a ride to the playground!

(I’d obviously need a different context for relativity and quantum mechanics … how about The Sun! 🙂 )