A while back I described a rather complex game we created that simulated genetic reassortment. A couple days ago we re-created this game in a somewhat easier and more interesting way.

The whole thing can be played with just pens and your old, unused business cards (who uses business cards anymore!?), a coin, a 4-sided die, and a 10-sided die. Here’s a picture of the game someplace in the middle of play (the calculator isn’t needed; it was just sitting on the table): 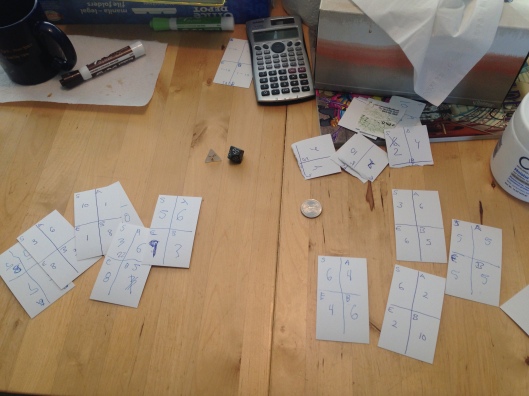 Give each player 5 blank cards. Players divide each of their cards into 4 sections (see pic), and label each section with what phenotypic characteristic they represent. In this case we had “S” for size, “A” for number of arms, “E” for number of eyes, and “B” for brain power (intelligence). You create your initial creatures by entering a number for each creature feature, with the only constraint that they must add to 20. Then you pile them all up, shuffle them, and hand them back out to the players randomly.  (This randomization is optional; the creator of the creatures may wish to keep their own hoards.)

Each round of play consist of these steps:

This simple games turns out to actually be quite fun; we played it for a while!

Last night I had what I thought might be a great idea for a genetic reassortment game, and this morning Leo and I created and played v1.0.

The genes (traits) and chromosomes: Make a bunch of approx. 3in x 3in squares of paper (16 total in this case), and cut them “together” to make four puzzle-like interlocking genes (aka. trait) pieces that are the same for each. So we created 8 chromosomes of four (so far unlabeled) genes/traits each. Now label TWO SETS of 4 genes of each type (shape) for hair color: H0, H1, H2, and H3, then the same for eye color (E0…3), skin color (S), and height (T, so as not to confuse it with hair color). So you’ll end up with two copies of each of eight genes for each trait, as depicted here: 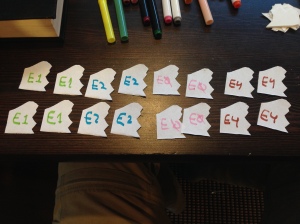 Except for height (which we indicated by the size of the writing), I recommend using the correct colored pen for each color, otherwise you’ll get confused. Actually, Leo and I got confused a bunch of times. We skipped H3 (in the above pic), and we labeled the S genes on the wrong side, so that the chromosomes don’t link together, as you’ll see in a minute. 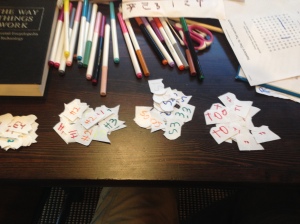 Okay, so that’s all the prep you need. There are two stages to the play: One trait at a time, put all 16 of each type into a hat or bag, and then randomly pick 2 of each of the four genes. Link them together create two chromosomes for your initial ancestral pair, like this:

(Except that we labeled the S on the wrong side, so it didn’t fit right … but you get the idea!)

Okay, here’s the fun part (for Leo, anyway):! The numbers give the trait dominance; higher numbers are dominant over lower ones (obviously if you have the same, then you don’t have a dominance issue). Write the dominant trait at the bottom of a piece of paper, and then each player draw your person!

Here’s Leo’s (we confused ourselves by using the wrong pen colors the first time, thus the crossed out person on the right): 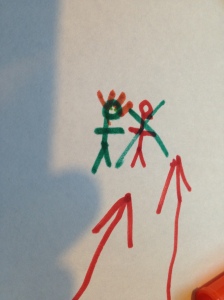 And here’s mine (I also confused myself at first!):

Okay, so you can see where this is going, right?

One of you gets to be the female donor (“mommy”), and the other “daddy”. Each player flip either one coin to choose which chromosome will be transmitted to the child (in the linked model), or four to choose which gene of each trait will be transmitted (in the unlinked model). (You can do the assortment either linked or unlinked. I’ve created this version so that the genes (traits) are linked by the puzzle-piece nature of the genes, so you only need two coins (one tossed for each parent), whereas the unlinked model you need eight coins – one tossed for each trait for each parent.)

Here’s what we got: 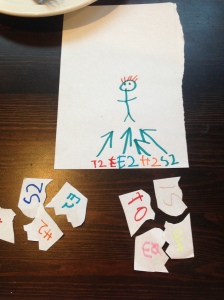 Obviously you can repeat this over and over, randomly creating new partners for the offspring, and with enough kids playing you could play this all day!

I think that this game would also be great to play among consenting adults, while judiciously applying legal consciousness-modulating substances. 🙂