Back in the ’90s, when I was doing my cognitive neuroscience postdoc in Pittsburgh, I did this little side project called “Gorilla (Guerilla) Science”. The idea was based on the insight that there are many situations when people are just sitting around doing pretty much nothing at all, like waiting for a bus, in a movie line, or in sitting on the toilet, and that these would be great places to put some in context science teaching, for example by putting an educational poster on a nearby wall; maybe someone would learn something. Of course these days no on just stands around, but is instead glued to their phones. But the key points wasn’t just that people are standing around with nothing to do, but more to emphasize that science was everywhere, all the time. The posters should be relevant to the context. For example, in a bathroom you might explain how the toilet works, and in a theater you might explain how the illusion of motion is created, and so on.

Here’s a short newspaper report on a Gorilla Science experiment undertaken in one Pittsburgh area school: 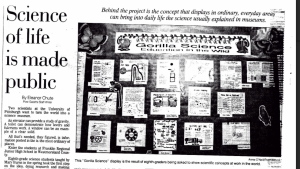 The project was instantiated in a number of ways, the most interesting of which was that a local high school did a whole series of posters. I don’t know whether they ever went up anywhere. I have a copy of a newspaper article that came out on this at the time, but I’ll have to find it amongst my piles of old papers.

Anyway, so, I use this technique all the time with Leo. Whenever we are anywhere at all, I’m looking for math and science in the context, whether it’s driving or hiking, or at a playground, or whatever, we’re always talking about either some of the science or the math in the setting.

All of this is just a long winded way of introducing our shower curtain: 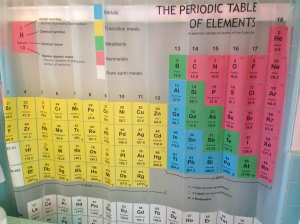 It’s made by “Smart” (which stands for “Simple Memory Art”), and I think that I got it via ThinkGeek.

To the point of Guerilla Science, Leo has actually made a bunch of interesting observations, just from this thing just hanging in the bathroom. For example, he recently noticed that some of the atomic weights are the same, for example: 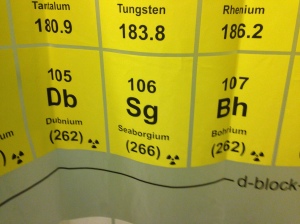 He also noticed that some atomic weights are integers and some have a non-zero fractional (decimal) part.

This led to a long discussion about ions and radioactivity (which he already knew about), and about how it’s really the number of protons that makes an element that particular element, and so on. And also to some rather detailed math about how the “average” atomic weight is calculated. (I actually had to look this up; it’s much more subtle than I had expected!)