We used to live near a train station, and for Leo’s first couple-three years, he was completely fascinated by train crossing gates…he could take or leave trains, but the crossing gates were his favorite thing. There was a particular time in the early evening when about 6 trains would come through the station over a period of about fifteen minutes (just coincidentally, as part of the evening commute schedules), and I would sometimes take him out to watch the gates go up and down and up and down as the various trains rolled through. In fact, we got him a pretty cool train crossing toy that has a motion detector and speaks Japanese, English, and French. It’s the thing on the right in this pic:

The electronics on the left aren’t part of the toy. That’s a liquid detector circuit that Leo and I built using this completely fantastic electronic building blocks thing called Snap Circuits,

which Leo and I have been using since he was…probably two years old.

By the time we were potty training him he was pretty good with the Snap Circuits. I designed the circuit, but Leo mostly built it. (There’s one part that I had to do because there’s an overlapping short that had to be taped. You can sort of see this in this picture, covered by a piece of orange tape.)

Okay, so liquid detector…railroad crossing toy…Given the title of this post, you can probably see where this is going! 🙂

And, here’s the obvious missing piece: 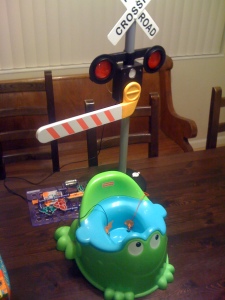 “Did it actually train him?” I hear you asking…. Well, yes and no. It certainly worked to get him excited about using the potty. Unfortunately, he was so excited that all he did was to try over and over to use the potty until he ran out of … um, product.

And cleaning the electrodes was NOT fun!

Not ready for patent protection, I think! 🙂

ps1. He did, of course, eventually learn to use the potty, although not, I’m sorry to say, by virtue of our invention.

ps2. You may also wonder how the circuit was hooked up to the toy. Well, it wasn’t pretty, but it worked: